Long ago, although mother baked regularly, I envied neighbours who ate store-bought white bread. It had thin soft crust and perfect gumminess for making great spitballs. And, children in those houses did not wear pajamas sewn from flour sacks.

In the nineties, the adult version of me had given up pillow-breads and discovered Vancouver’s first craft bakery. It was Ecco Il Pane (“Here is the Bread”), an enterprise founded by Chef Chris Brown and Pamela Gaudreault.

In 2015, Brown told journalist Stainsby that great bread needs crazy passion. “I still get excited every time I pull a batch out. There are so many variables at play. I like the beauty of small batches; they’re gifts coming out of the oven.”

But, we can still find individuals producing small batches of extraordinary baked goods. Vadim Mugerman, owner and head-baker of Bad Dog Bread is one. He does his work during idle hours of early mornings at Orto Artisan Pasta, a successful North Vancouver restaurant run by Brigitte and Steeve Raye.

In conversation, Mugerman told me, “Time is the most important ingredient in good bread but it’s never listed on labels.”

Bad Dog Bread proprietor Vadim Mugerman learned his trade in French, Belgian and German bakeries. He concluded that while mixing, proofing and baking methods were critical, quality ingredients were elements that separated great from good. This is particularly true of whole grain flours where freshness lasts days or weeks, not months.

One technique Mugerman observed in Germany was a gentle spray of water onto bread just out of the oven. It adds shine and subtle improvements to the crust.

Breads from artisan bakeries offer better taste and nutrition than supermarket fare. It is indisputably good, and it is healthy. Yet, premium breads are not found on most tables. Partly, this results from lack of consumer education. Clearly though, potential customers resist paying premium prices.

Vadim says that many people have little difficulty paying $5 dollars for a specialty coffee. He might also have mentioned $10 dollars or more for an unhealthy burger combo. He notes, “One of my multigrain loaves could feed a family of four for a day.”

In medieval times, bread was a staple for all classes, although poor people usually ate cheaper but healthier whole grain products. Wealthy folks opted for breads from refined white flours, so in that situation, being rich was a disadvantage.

Bad Dog Bread began by in-house grinding of organic, grown-in-BC whole grains. But, space limitations and growing demand made that difficult to continue.

The solution came in a relationship with Bruce Stewart of Vancouver Island’s True Grain, suppliers of freshly ground flour made of non-hybridized heritage and ancient grains like Red Fife, Einkorn, Emmer, Spelt, Khorasan, & Rye, sourced mostly from small BC growers.

Bad Dog continues grinding some of its own flours and plans new stone milling equipment when space and business conditions allow. Mugerman says that bread flour from large scale manufacturers lacks the freshness he treasures but also includes additives he would rather avoid.

Chemicals added to wheat flour have various purposes. Some restore nutritional content lost in processing but others are for the benefit of manufacturers, not consumers. Andrew Whitley, a leading organic baker in the UK, campaigns for better quality in bread and an end to product adulteration. Whitley wrote The Shocking Truth About Bread for The Independent newspaper. He asked:

So why are calcium propionate, amylase, chlorine dioxide and L-cysteine hydrochloride now crammed into our daily bread? This is Britain’s bread: a technological marvel combining production efficiency with a compelling appeal to the lowest common denominator of taste. It is the very embodiment of the modern age…

I asked the Vadim if he had a favourite bread bakery not his own. He mentioned FIFE, an artisan bakery founded in 2016 by 20-something Felix Yau, who says he baked his first loaf — albeit, not a great one — at age nine, using a toaster oven.

I can vouch for Fife, based on these limited but tasty samples: 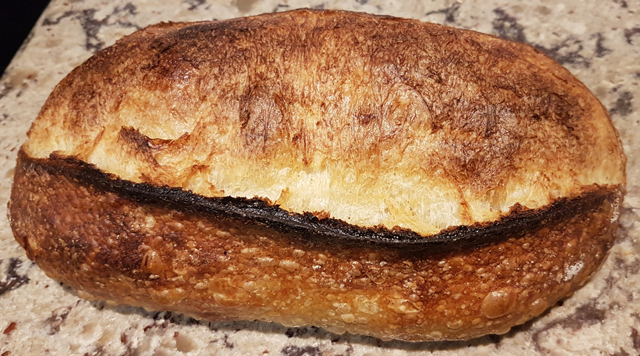 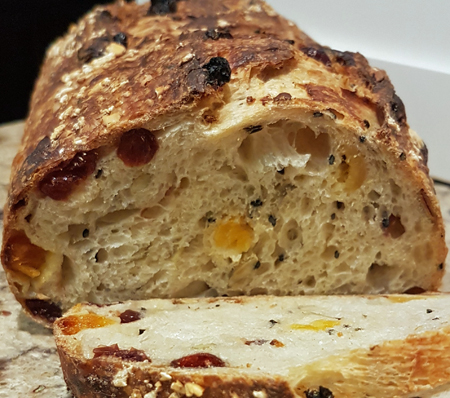 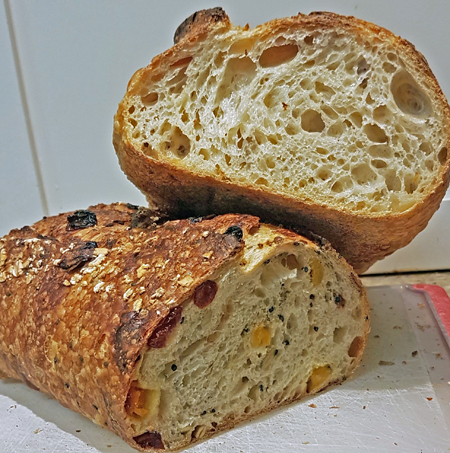 Resources for bread lovers and home bakers, in no particular order:

Eat This Podcast: Our Daily Bread